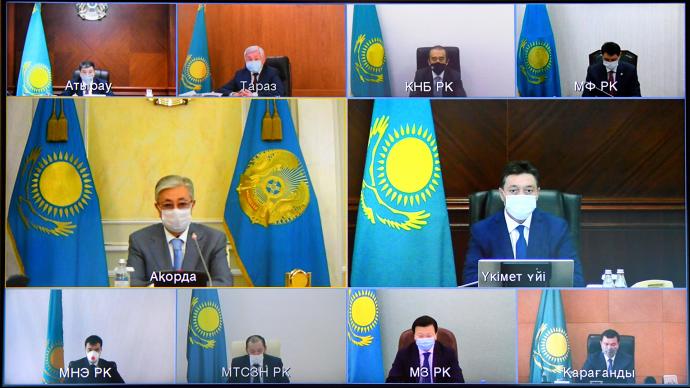 At the extended government session chaired by the President Kassym-Jomart Tokayev, the Prime Minister Askar Mamin reported on the results of the country's socio-economic development for the first half of 2020 and the measures taken to further develop the economy.

The Head of Government noted that amid global negative trends in the first half of this year, Kazakhstan's GDP fell by 1.8%. At the same time, steady growth was observed in the real sector of the economy. The production of goods grew by 4.1%.

The main drivers were construction (+11.2%) and manufacturing (+4.8%), the growth of which was achieved due to the automotive industry (46%), pharmaceuticals (24%), production of metal products (20%), light industry (8%), production of rubber and plastic products (8%) and paper (15%). Positive dynamics was also noted in the mining industry (2.2%). Housing commissioning in the country grew by 7.3%. At the same time, amid the introduction of the state of emergency and restrictive quarantine measures, a decrease in the services sector by 5.6% for 6 months of this year was noted. Annual inflation was 7%.

Growth in all key indicators of socio-economic development at a level above the national average was achieved in the Karaganda and North Kazakhstan regions. All the main indicators in the positive zone are observed in Kostanay, Almaty, Zhambyl, Akmola, East Kazakhstan regions, as well as the cities of Nur-Sultan and Almaty, separate indicators in the negative zone are in the West Kazakhstan, Turkistan, Aktobe regions, as well as Shymkent. The Kyzylorda, Atyrau, Pavlodar and Mangystau regions lag behind the national average level for most indicators.

“Under current conditions, the main task of the government is to mitigate the negative consequences of the coronavirus pandemic and the global crisis, and to maintain employment in the country. Large-scale measures are taken for this,” said Mamin.

The head of government noted that during the state of emergency 2 packages of urgent and operational measures (March 23 and 30, 2020) were taken to stabilize the economy and support the people. As part of the Comprehensive Plan for Restoring Economic Growth, by the end of 2020, specific sectoral measures are being implemented to stimulate business activity, support employment and incomes. Work is underway to formulate the a new Strategic Plan until 2025, which will determine the main guidelines for the country's new economic course for the medium term.

As part of the implementation of the Employment Roadmap and government programs, measures to create employment have covered more than 1.2 million citizens. Under the new Employment Roadmap, more than 6.1 thousand out of 6.5 thousand projects have been launched, 146 thousand people have been employed. The construction and reconstruction of 5.5 thousand km of republican and 4 thousand km of local roads have started. For 6 months of 2020, 800 km of water supply and sanitation networks were reconstructed, 21 regional gas supply projects in the amount of 13.7 billion tenge are being implemented.

As part of the industrialization map, 160 projects will be implemented in the fuel and energy and agricultural sectors, metallurgy, chemical and light industry, construction industry, engineering and pharmaceuticals in the amount of 1.1 trillion tenge.

According to the results of the first six months, the volume of investments in fixed assets in the agricultural sector increased by 19% compared to the same period last year to 232 billion tenge, and into processing — by 16.6% to 40 billion tenge. This year, the total sown area of ​​crops increased to 22.5 million hectares. For 6 months of this year physical agricultural exports grew by 14.9% from 4.7 to 5.4 million tons. As a result of the implementation of projects to increase and restore water availability, the total volume of irrigated land will increase from 1.5 million hectares in 2020 to 2 million hectares in 2022.

As part of the development of Kazakhstan as a global data hub, 32 traditional and 17 large mining data processing centers with attracted investments of more than 110 billion tenge were built. Until 2024, an additional investment attraction of 633 billion tenge and the creation of 2,000 new jobs are planned.

The prime minister emphasized that the government will continue to implement a countercyclical macroeconomic policy lightening the tax burden on businesses and directing budget expenditures to maintain economic activity. Work will continue on the development of human capital, the implementation of institutional reforms, conditions have been created for the massive attraction of foreign direct investment and the development of digital infrastructure.

“The government will take all necessary measures aimed at solving the problems of stabilizing the economy, ensuring the sustainability of employment and supporting incomes,” said Mamin.