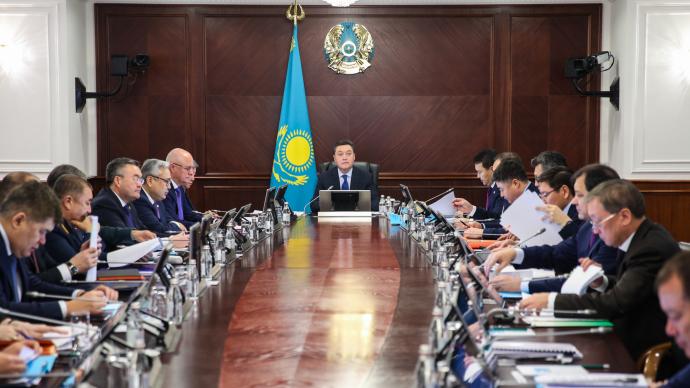 At the Government session chaired by Prime Minister Askar Mamin, a draft Concept of the State Geological Exploration Program for 2021-2025 was considered.

The concept was introduced by the Minister of Ecology, Geology and Natural Resources Magzum Mirzagaliyev, reports on the relevance of approaches to the development of exploration in Kazakhstan were made by the President of the Kazakhstan Society of Petroleum Geologists Baltabek Kuandykov, Commercial General Manager of Shell Kazakhstan Aidan Murphy, General Director of Kazakhmys Barlau Galym Nurzhanov, Akims of the East Kazakhstan Region Daniyal Akhmetov, Karaganda Region – Zhenis Kassymbek, Chair of the Board of JSC SWF Samruk-Kazyna Akhmetzhan Yessimov, Deputy Prime Minister Roman Sklyar.

“The first President – Elbasy Nursultan Abishevich Nazarbayev set the task of increasing the efficiency of traditional extractive industries and bringing Kazakhstan to the world geological exploration market. The Head of State Kassym-Jomart Kemelevich Tokayev instructed the Government to develop a state exploration program. The oil and gas and mining and metallurgical sectors must be provided with a sustainable raw material base. Existing deposits are gradually depleted. Moreover, at present, the knowledge of the territory of Kazakhstan is a little more than 25%,” said Mamin.

The prime minister emphasized that the effective implementation of the State Geological Exploration Program will allow attracting additional private investments of up to 4 tenge per 1 invested tenge. Replenishment of the country's mineral resources base, in particular, near single-industry towns, will have a positive impact on the economy and become a real basis for the development of industries.

“When the fields are discovered, new production complexes will be created, which will attract up to 6 trillion tenge of investments and create about 20 thousand additional jobs,” Mamin emphasized.

The prime minister noted the need to use new methods of geophysical research and remote sensing of the Earth when conducting geological exploration.

The prime minister instructed the Ministry of Ecology, Geology and Natural Resources by May 31, 2020, to ensure the introduction of the draft state program in the Government.